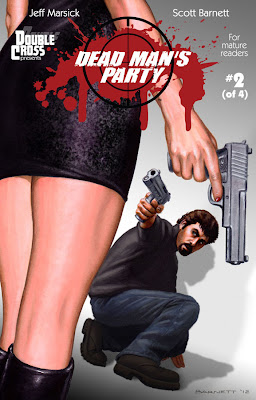 The cover of issue #1 has a recommendation from Duane (Birds of Prey, Cable) Swierczynski and it states. "Dead Man's Party is super smart, sardonic and packed with surprises. I can't wait for issue #2." This is an actual quote, I not only fully agree and endorse issue one but I do doubly for issue #2. I had to go back and read issue #1 and then #2 and did this yet again to see if I felt anywhere in the vicinity of Mr. Swierczynski quote. I must report I have not read a book I actually cared for this much with character development that surpasses some of the greats in the industry. I already have a black hole in my soul just knowing this is a 4 part series. I do not know if that leaves out a sequel, but that would be more than welcomed.

So here is how the story goes on how I found out about this gem. It was at New York Comic Con last year and I was walking around enjoying myself, promoting Spell #1 and doing some work on my post on NYCC. I was almost on my last leg after being there for hours and on my way out and I get called over by Scott (artist) Barnett to the Dead Man's Party table. At first I must admit that I just wanted to walk on by and call it a day but Scott was very convincing. So I purchased the first issue of DMP and exchanged a few words with Scott and Jeff and then finally got to escape the chaos of NYCC for another year.

I must admit it was not for at least a month that I was able to turn the pages of issue one since I was knee deep in work putting the finishing touches on Spell #1. When I did get to it I was very impressed and this book passed with flying colors, I was amazed at the work that was put into this book and it does not hurt to have a thumbs up from Duane Swierczynski. Yeah that never hurts. 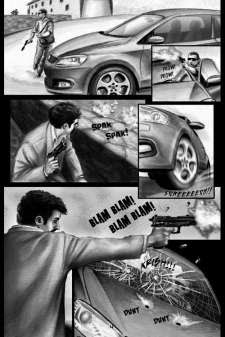 I thought it was proper to get this review out before NYCC starts tomorrow. In the last year me and Scott Barnett have become pals on Facebook and I truly appreciate all the input he has given me to help me further my skills.

Now for Issue #2, outstanding, diverse and original to say the least. Once again Jeff Marsick dishes up a splendid story that will fill any comic fans empty belly with a 5 course meal and dessert to boot. The main character Ghost is an hired gun with the finesses that James Bond and Jason Borne wish they had. I have read a lot of books and I can recall reading anything in the league of DMP.

Now for my forte, Scott Barnett's art works with this book like he was destined to do it. The action is fast paced and his work captures the essence of Ghost and surrounding cast. I really appreciate his work in black and white cause the detail really captures the eye. The shading shows the quality of his work and the time put into each and every panel and the covers for the first two issues are fabulous and inspiring to say the least.

I must say I can not wait to catch up with these two and NYCC this weekend and I wish them the best on all there artistic adventures. We will just have to wait for further adventures of Ghost and issue #3 can not come fast enough. 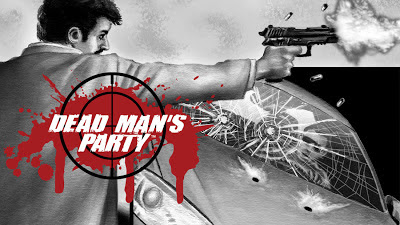