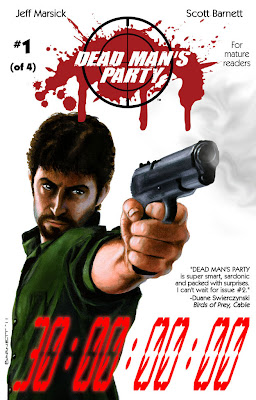 I will say I do not pick up many black and white interior books probably since the late 80's and early 90's which I may say were mostly Manga such as Appleseed, Grey and so many more great manga properties. Then you had such greats like Ex-Mutants, Teenage Mutant Ninja Turtles, Zen: The Intergalactic Ninja and a slew of Robotech comics from 3 different companies. A lot of great material during those years from independent creators and publishers.

I actually went and ordered a nice handful of titles a few weeks back and I plan on doing reviews of each title to promote independent comics. I actually got the first comic that was printed by Ka-Blam and is for sale on both the sites about a year ago, Ugaara #1 created by Wil Jones. This is what finally gave me the idea of putting out my own book.

I actually picked up Dead Man's Party #1 not from these sites but at the New York Comic-Con this year where I also got to meet the creators of this awesome book. I was quite impressed when meeting Jeff Marsick (Writer) and Scott Barnett (Art) at NYCC this year and were kind enough to sign my copy and talk shop. The reason this will always stick out in my mind is for the basic fact that they were the only people that actually approached me and not wait for me to come up to there table like most of the creators in attendance at NYCC. For them to take there time and promote there passion in comics was quite impressive, it is very rare for any creators to approach you at these functions, I even had comic vendors when looking for comics to add to my collection pay me no mind (Must be rich!!!)

This first entry in the Dead Man's Party series of four books bleeds realism, this is no book for children or your basic superhero fan. You get into the main characters mind and the way he thinks. The art is beautiful and stunning, the writing is very intense and takes a few twists and turns that climaxes in a splendid ending too book one. Twenty-Six pages of pure octane excitement. Read issue #1 of the series that novelist and Birds of Prey writer Duane Swierczynski calls "super smart, sardonic and packed with surprises". This is what comics should be like and I look forward to future issues of a true diamond in the rough!